A RPG about Outcast Mages hunted by Wizard Fascists because of who they are, not what they've done.

-Everything you love about Psi*Run including questions, a trail mapping out where you've been, and a Risk sheet (under construction) allowing you to pick where you succeed and fail when you roll

-A system of labels describing how the society and government has decided to think about you, influencing how NPCs react to you based on how Mundane society mocks you, Magical Culture understands you, and how the Authority can hurt you

-A flexible personalized magic system that expresses your character's individuality

-Setting element creation sheets inspired by Dream Apart, Dream Askew, and Belonging Outside Belonging games allowing each game to have a personalized setting and to help ground you quickly into the world of No Crime But Living

-Supports for shared GMing to help you come up with ideas, responses, and situations so even if you aren't confident in your GM or improv skills, you can help make things happen in the game

- Direct connection to Cast A Queer Spell, a journaling RPG about growing up queer in a repressive magical society that thinks it knows everything. You can port characters between the two for added depth and exploration

The Authority had been gaining power in Magical Society for many years, but now they have taken control. In a startling incident, they attacked many wizards they viewed as undesirable and removed them from their homes, killing many. You are one of the few who survived and must now escape to Sanctuary in the hope of later planning your return to help your fellow oppressed mages.

A dark hack of Psi*Run that uses magic as a metaphor for the plight of the downtrodden. You will make a character trying to understand the truth of magic while staying one step ahead of the wizard Authority, trying to avoid notice of the Mundane world, and constantly being reminded of what the Magical Society thinks of you. If you escape, you might be able to truly make a difference.

This game makes extensive use of a stance system to describe the outcome of actions, from VICTORIOUS to BRUTAL. There is no GM unless you want one, the dice indicating how bad things are for you if you fail and helping determine what happens when things are unclear. Most importantly, each character has one or more backgrounds describing both the powerful magics they wield and the unique ways the Authority oppresses them.  This game also supports SOLO PLAY

Each label describes a way that the government and society defines people and then oppresses them. People labelled violent by the society for whatever reason are believed to be a threat at all times, so the Authority Pursuers are ALLOWED TO KILL YOU WITH IMPUNITY. If your character is identified to be psychologically Weird, the Authority is allowed to INDEFINITELY IMPRISON YOU WITH IMPUNITY.  I do not have enough space to describe all the content warnings involved in playing this game. Just assume if you've heard it on the news, it could happen in this game. Be kind to your other players and know your safety techniques.

Is facist supposed to be fascist?

Oh no you're totally right! I can't believe I made that error. I mean I originally made this for a game jam so maybe that did it but that's a major oversight on my part. Thanks for pointing it out. I'll fixing it. 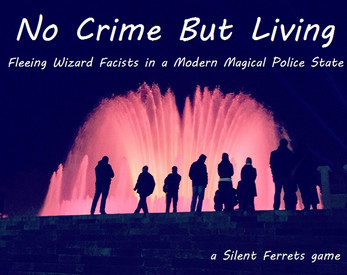